With the heyday of bigdata and people running lots of Postgres databases, sometimes one needs to join or search data from multiple absolutely regular and independent PostgreSQL databases (i.e. no built in clustering extensions or such are in use) to present it as one logical entity. Think sales reporting aggregations over logical clusters or matching click-stream info with sales orders based on customer ID-s.

So how do you solve such ad-hoc tasks? One could of course solve it on application level with some simple scripting, but let’s say we only know SQL. Luckily PostgreSQL (plus the ecosystem) provide some options out of the box and there are also some 3rd party tools for cases when you for example can’t use the Postgres options (no superuser rights or extensions can be installed). So let’s look at the following 4 options:

Around since ever, this method might easily be the simplest way to join independent Postgres databases. Basically you just need to create the extension (requires “contrib”), declare a named connection and then use the dblink function to specify a query, including a list of output columns and their datatypes. The query will be sent over to the specified connection, and the pulled in dataset will be handled as a normal subselect – thus from thereon one could use all the functionality that Postgres has to offer! Full documentation on the extension here.

On board since 9.3, the Postgres foreign-data wrapper (postgres_fdw extension, available in “contrib”) is an improvement over dblink and is well suitable for more permanent data crunching and one could even build complex sharding/scaling architectures on top of it with the introduction of “foreign table inheritance” in 9.6. Basically what you get here is a permanent “symlink / synonym” to a table/view on another database, with the benefit that the local Postgres database (where the user is connected) already has the column details on the table – most importantly size and data distribution statistics, so that it can figure out better execution plans. True, in older Postgres versions the plans were not always too optimal but recent 9.6 version got a lot of attention in that area. NB! The FDW also supports writing/changing data and transactions! Full documentation here.

Overview of steps required for setup:

Presto is an open source distributed SQL query engine, meant to connect the most different “bigdata” datasources via SQL, thus not really Postgres-centric but DB-agnostic. Created by Facebook to juggle Terabytes of data for analytical workloads, one can expect it to handle your data amounts efficiently though. Basically it is a Java-based query parser/coordinator/worker framework, so not the most light-weight approach, but definitely worth a try even for smaller amounts of data. For bigger amounts of data it assumes nodes with a lot of RAM!

Setup might look scary at first, but it will actually only take minutes to get going as the docs are great. Process in general can be seen below. See docs for setup details here.

Another “generic” solution for connecting various databases, including Postgres, via standard SQL can be performed by using the Unity “virtual datasource” plugin for the popular SQL client called SQuirreL. Actually some other SQL client can be used also, SQuirreL just seems to be well documented. 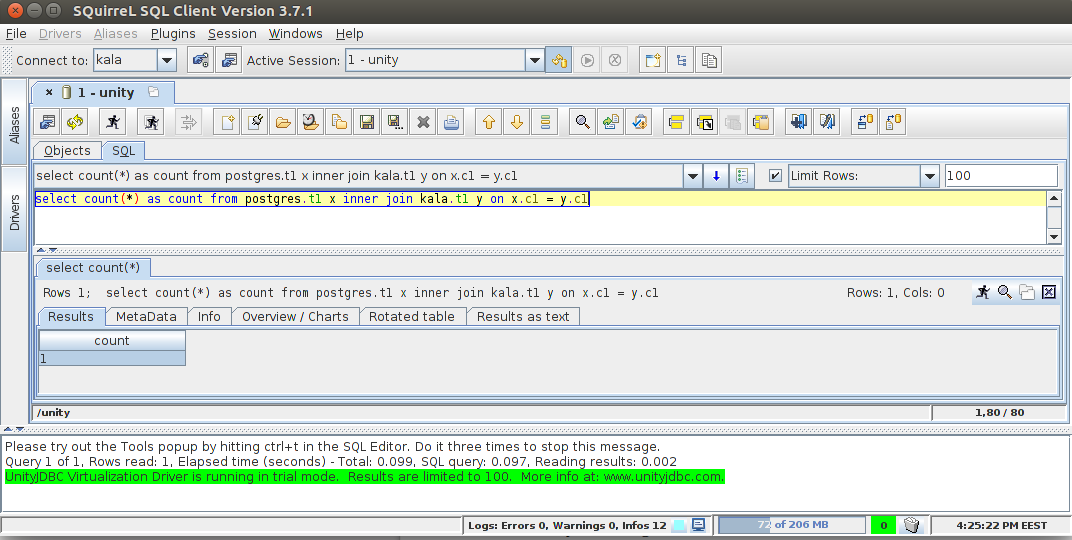 That’s all. Hope you found out something new and let me know in the comments if you know some other cool approaches for ad hoc mixing of data from different Postgres databases. Thanks a lot!