It has always been commonly known that settings max_connections to an insanely high value is not too good for performance. Generations of system administrators have followed this rule. Just out of curiosity I thought I’d give it a try to see, which impact setting max_connections in PostgreSQL  really has.

To prepare for the test we have created a simple test set using pgbench. The scale factor was set to 100, so that we are running the test using 10 mio rows. Shared buffers are set to 2 GB.

In a first test we used various settings for max_connections – but, we kept the number of actually open database connections constant. In our case we used CONNS=8 and let the read only benchmark run for 20 min:

The results are pretty constant. Even if max_connections is massively increased in postgresql.conf, the performance curve of PostgreSQL is totally flat. This is somewhat expected.
The number of transactions per second stays constant at 150.000 / second (reads). So, what is the point of setting max_connections to a low value then?

In this case the results start to be interesting. The more connections we got, the lower our TPS count will be. Although the decrease is by no means large, it is still stable and can be observed clearly in the results:

Let us repeat the very same test with 32 open connections now and see if the change in throughput given more connections is constant or not.

Here are the results:

What we see here is a substantially higher decline (percentage wise). This is somewhat important because the more loaded the system is, the higher the impact is going to be in this case. 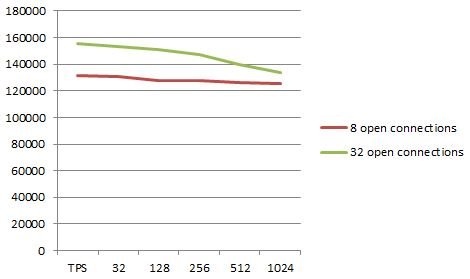 To sum up things we got to point out that max_connections alone is not what causes issues. It is more the combination of many idle connections along with many active ones.