effective_cache_size: What it means in PostgreSQL

Many PostgreSQL database users might have stumbled over the effective_cache_size parameter in postgresql.conf. But how can it be used to effectively tune the database and how can we speed up PostgreSQL using effective_cache_size? This blog will hopefully answer some of my readers’ questions and reveal the hidden power of this secretive setting.

A lot has been written about RAM, PostgreSQL, and operating systems (especially Linux) over the years. However, to many memory usage is still a mystery and it makes sense to think about it when running a production database system. Let’s take a look at a simple scenario and see how memory might be used on a modern server. For the sake of simplicity, let’s assume that our server (or VM – virtual machine, ed.) provides us with 100 GB of RAM. 2 GB might be taken by the operating system including maybe some cron jobs, monitoring processes and so on. Then you might have assigned 20 GB of memory to PostgreSQL in the form of shared buffers (=PostgreSQL’s I/O cache). In total PostgreSQL might need 25 GB of memory to run in this case. On top of those 20 GB it will take some memory to sort data, keep database connections around and keep some other vital information in mapped memory.

The question is now: What happens to the remaining 73 GB of RAM? The answer is: Some of it might be “free” and available but most of it will end up as  filesystem cache. Whenever Linux does I/O and in case enough free memory is around the filesystem cache will kick in and try to cache the data to avoid disk I/O if possible. The filesystem is vital and can be changed in size dynamically as needed. If PostgreSQL needs more RAM to, say, sort data, it will allocate memory which in turn makes the operating system shrink the filesystem cache as needed to ensure efficiency. 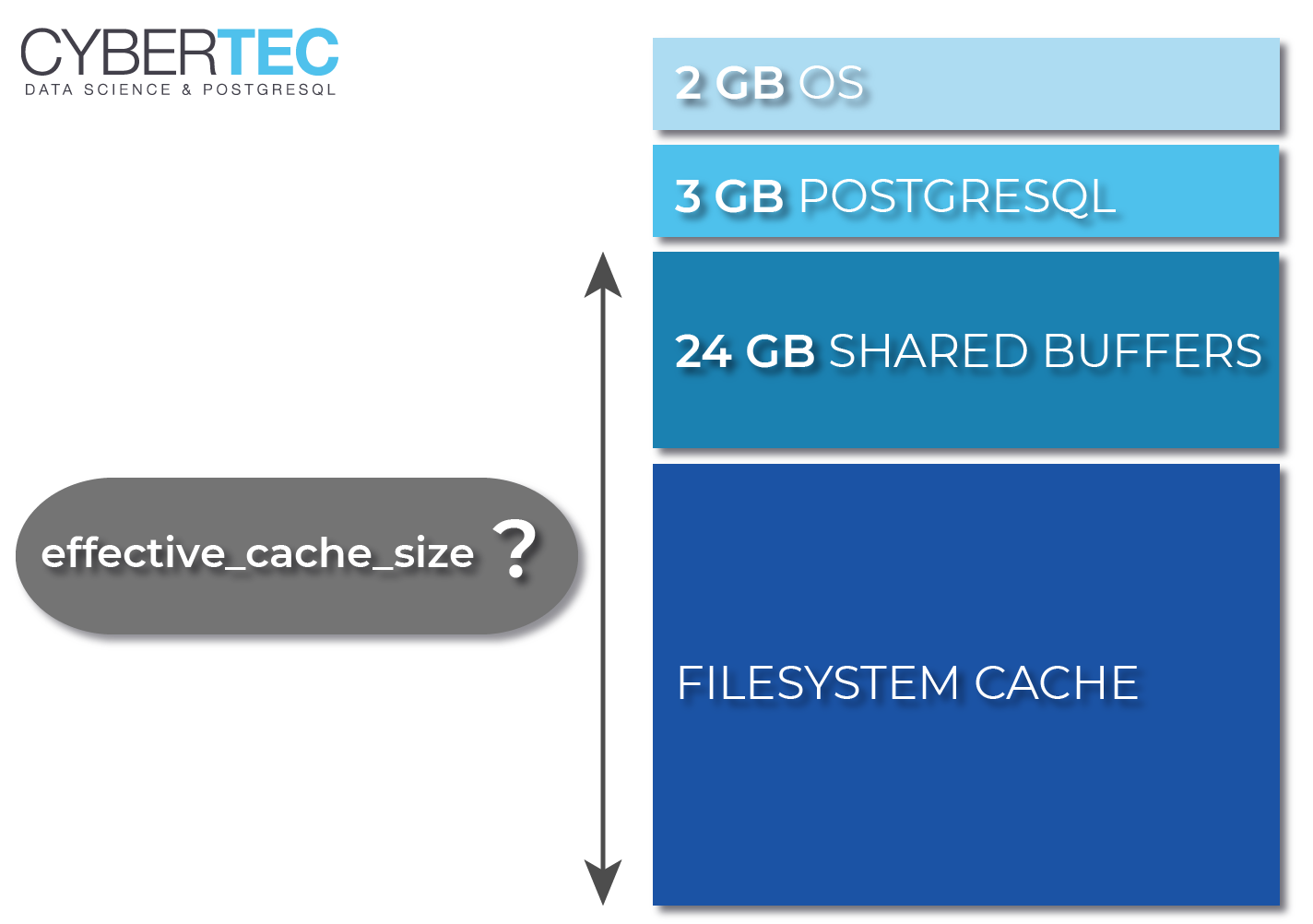 RAM and the PostgreSQL optimizer

The PostgreSQL optimizer is in charge of making sure that your queries are executed in the most efficient way possible. However, to do that it makes sense to know how much RAM there is really around. The system knows about the size if its own memory (= shared_buffers) but what about the filesystem cache? What about your RAID controller and so on? Wouldn’t it be cool if you the optimizer knew about all those ressources?

That is exactly what effective_cache_size is all about. It helps the planner to determine how much cache there really is and helps to adjust the I/O cache. Actually,
the explanation I am giving here is already longer than the actual C code in the server. Let’s take a look at costsize.c and see what the comment says there:

This code snippet taken directly from costsize.c in the core is basically the only place in the optimizer which takes effective_cache_size into account. As you can see, the formula is only used to estimate the costs of indexes. In short: If PostgreSQL knows that a lot of RAM is around, it can safely assume that fewer pages have to come from disk and more data will come from the cache, which allows the optimizer to make indexes cheaper (relativ to a sequential scan). You will notice that this effect can only be observed if your database is sufficiently large. On fairly small databases you will not observe any changes in execution plans.

However, the PostgreSQL query optimizer is not the only place that checks effective_cache_size. Gist index creation will also check the parameter and
adjust its index creation strategy. The idea is to come up with the buffering strategy during index creation.

If you want to learn more about PostgreSQL memory parameters you can find out more in our post about about work_mem and sort performance.