Cluster encryption can be used if the DBA cannot or does not rely on the file system in terms of confidentiality.

If cluster encryption is enabled, PostgreSQL encrypts data  (both relations and write-ahead log) when writing to disk, and decrypts it when reading. The encryption is transparent, so the applications see no difference between the encrypted and unencrypted clusters. 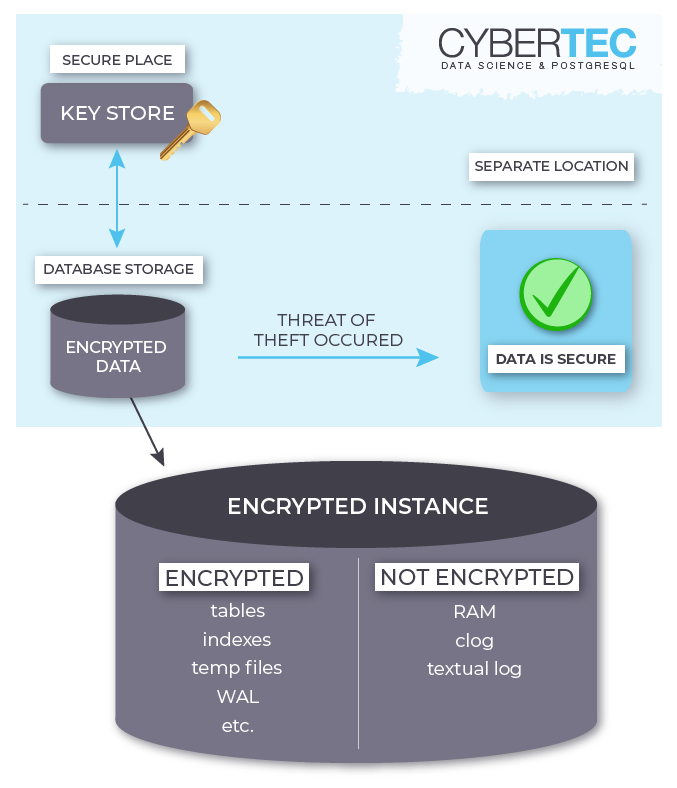 PostgreSQL 9.6 with TDE on Ubuntu

In this blog, we go through the basic steps used to install PostgreSQL 9.6 with Transparent Data Encryption (TDE) on Ubuntu. You can download the patch for this here.

Just for example, I am creating it at the default location:

You can choose where all files will be installed by passing --prefix. Default is /usr/local/pgsql which I am using here for example. Make sure you enable openssl by passing --with-openssl:

The above two commands should run without errors. Now we are ready to install:

We can now proceed to initialize the cluster. For that, let’s switch to the postgres user:

As a good practice, lets add the PostgreSQL binaries to PATH:

To create an encrypted cluster, use the -K option to pass the initdb utility. For example:

Internally, PostgreSQL always uses the encryption key. If the encryption key command returns a password then a key will be generated from the password using a built-in key derivation function. Optionally, you can pass encryption_key as a hex encoded 256 bit key from any key store.

On completion, initdb stores the encryption key command to postgresql.conf. Thus, the user can control the cluster using pg_ctl without passing the encryption command  again and again.

If encryption is enabled, full_page_writes must not be turned off, otherwise the server refuses to start. This is because the encryption introduces differences between data within a page, and therefore a server crash during a disk write can result in more serious damage of the page than it would do without encryption. The whole page needs to be retrieved from WAL in such a case to ensure reliable recovery.

Once the PostgreSQL server is running, client applications should recognize no difference from an unencrypted cluster, except that data_encryption configuration variable is  set.

Unlike pg_ctl, some of the server applications (for  example pg_waldump) do not need the -K because they are not able to process the postgresql.conf file.

To read more about the ongoing discussion on adding TDE in core PostgreSQL, please check here.

My passion for databases had me working as Oracle and Mysql DBA initially after graduation until I was introduced to PostgreSQL 9 years ago. Ever since then I have been working extensively on PostgreSQL database. I like the simplicity behind the PostgreSQL administration and the various open source tools that add useful features to PostgreSQL.