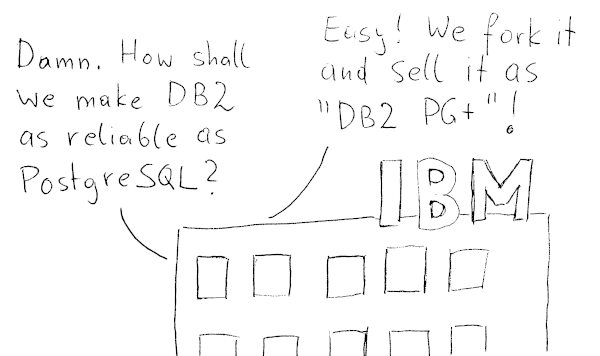 “Durability”, the D of ACID, demands that a committed database transaction remains committed, no matter what. For normal outages like a power failure, this is guaranteed by the transaction log (WAL). However, if we want to guarantee durability even in the face of more catastrophic outages that destroy the WAL, we need more advanced methods.

This article discusses how to use pg_receivewal to maintain durability even under dire circumstances.

The “traditional” method of archiving the transaction log is the archive_command in postgresql.conf. The DBA has to set this parameter to a command that archives a WAL segment after it is completed.

The important thing to consider is that the archived WAL segment is stored somewhere else than the database.

I have a redundant distributed storage system, do I still need to store WAL archives somewhere else?

Yes, because there is still a single point of failure: the file system.
If the file system becomes corrupted through a hardware or software problem, all the redundant distributed copies of your WAL archive can vanish or get corrupted.

If you believe that this is so unlikely that it borders on the paranoid: I have seen it happen.
A certain level of professional paranoia is a virtue in a DBA.

To reduce the impact, you can set archive_timeout: that will set the maximum time between WAL archivals. But for some applications, that just isn’t good enough: If you cannot afford to lose a single transaction even in the event of a catastrophe, WAL archiving just won’t do the trick.

pg_receivewal comes to the rescue

PostgreSQL 9.2 introduced pg_receivexlog, which has been renamed to pg_receivewal in v10. This client program will open a replication connection to PostgreSQL and stream WAL, just like streaming replication does. But instead of applying the information to a standby server, it writes it to disk. This way, it creates a copy of the WAL segments in real time. The partial WAL segment that pg_receivewal is currently writing has the extension .partial to distinguish it from completed WAL archives. Once the segment is complete, pg_receivewal will rename it.

pg_receivewal is an alternative to WAL archiving that avoids the gap between the current and the archived WAL location. It is a bit more complicated to manage and monitor, because it is a separate process and should run on a different machine.

Now if the worst has happened and you need to recover, you’ll have to make sure to restore the partial WAL segments as well. In the simple case where you archive to an NFS mount, the restore_command could be as simple as this:

With careful design and a little effort, you can set up a PostgreSQL system that can never lose a single committed transaction even under the most dire circumstances. Integrate this with a high availability setup for maximum data protection.