When to use tablespaces in PostgreSQL 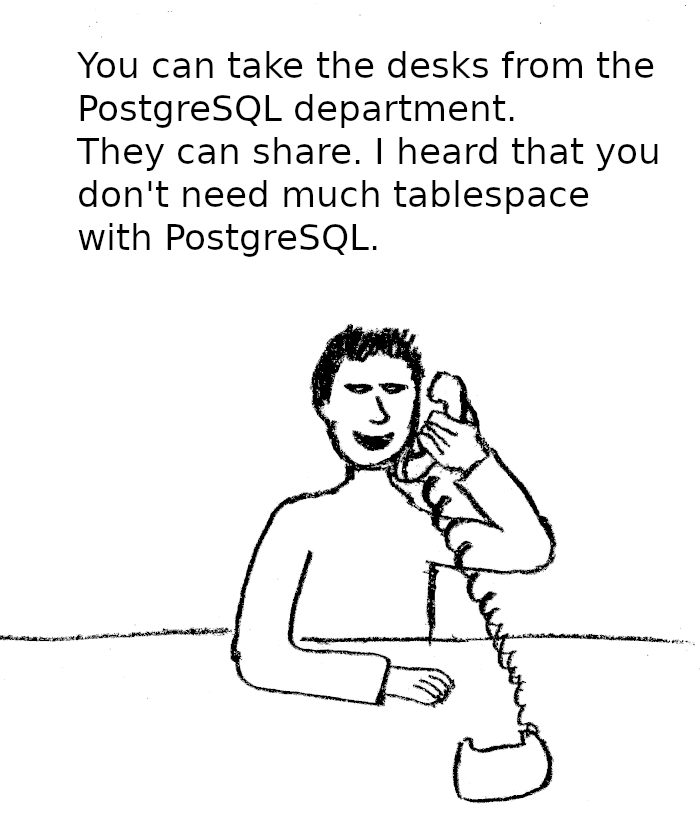 Users with an Oracle background consider tablespaces very important and are surprised that you can find so little information about them in PostgreSQL. This article will explain what they are, when they are useful and whether or not you should use them.

What is a tablespace

Essentially, a tablespace in PostgreSQL is a directory containing data files. These data files are the storage behind objects with a state: tables, sequences, indexes and materialized views. In PostgreSQL, each such object has its own data file. If the object is bigger, it will have several files called segments with a size limit of 1GB.

PostgreSQL uses the operating system’s file system for its storage. This is different from Oracle, which essentially implements its own “file system”.

Each PostgreSQL database cluster initially has two tablespaces. You can list them with \db in psql:

Then you can create the tablespace:

To use the tablespace, you can create a table or another object with storage in it:

Note that indexes are not automatically created in the same tablespace as the table.

You can also create a database in a tablespace:

Then all objects you create in that database will automatically be placed in the database’s tablespace.

There are ALTER commands to change the tablespace of any object. Moving an object to another tablespace copies the data files, and the object is inaccessible while it is being moved.

If you perform a file system backup of a database with tablespaces, you have to back up all tablespaces. You cannot back up or restore a single tablespace, and there is no equivalent to Oracle’s “transportable tablespaces”.

pg_basebackup with the plain format will try to save tablespaces in the same place as on the database server (the -D option only specifies the location of the data directory). To backup data from a tablespace to a different location, you have to use the option --tablespace-mapping=olddir=newdir. You can use this option more than once for multiple tablespaces.

When should I create a tablespace?

So what are the benefits of tablespaces that justify the administrative complexity?

If you are running in a virtualized environment with virtualized storage, all these points are moot, with the exception of the third. Since almost everybody uses virtualization these days, tablespaces are becoming an increasingly irrelevant PostgreSQL feature.

There is a tenacious myth circulating among database administrators that you should put tables and indexes on different disks for good performance.

You will hear people making elaborate arguments as to why the particular interplay of access patterns during an index scan will make this efficient on spinning disks. But spinning disks are going out of business, and you typically only saturate your storage system with several concurrent SQL statements, when all such access patterns will be disrupted anyway.

The truth behind the myth is that it is certainly beneficial to spread the I/O load over multiple devices. If you use striping on the operating system level, you will get a better spread than you will by carefully placing tables and indexes.

Tablespaces are rarely relevant in PostgreSQL. Resist the temptation to create tablespaces and leave all data in the default tablespace.