Is UPDATE the same as DELETE + INSERT in PostgreSQL? 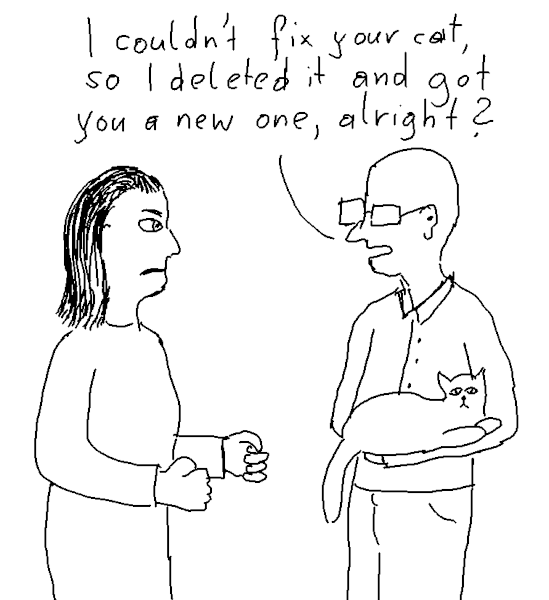 We know that PostgreSQL does not update a table row in place. Rather, it writes a new version of the row (the PostgreSQL term for a row version is “tuple”) and leaves the old row version in place to serve concurrent read requests. VACUUM later removes these “dead tuples”.

If you delete a row and insert a new one, the effect is similar: we have one dead tuple and one new live tuple. This is why many people (me, among others) explain to beginners that “an UPDATE in PostgreSQL is almost the same as a DELETE, followed by an INSERT”.

This article is about that “almost”.

Example showing the difference between UPDATE and DELETE + INSERT

In the two following tests, we will issue statements from two concurrent sessions.

Let’s reset the table before the second test;

Now let’s repeat the experiment with DELETE and INSERT:

Explanation for the observed difference

The documentation describes what happens when an SQL statement runs into a lock in a transaction with the default READ COMMITTED isolation level:

The above shows that there is some way for PostgreSQL to find the new version of an updated row. That is why the first experiment returned a result row. In the second experiment, there was no connection between the old, deleted row and the newly inserted one, that’s why we get no result in that case.

To figure out how the old and the new version are connected, we have to look deeper.

Looking at UPDATE with “pageinspect”

The extension pageinspect allows us to see all data in a PostgreSQL data page. It requires superuser permissions.

Let’s use it to see what’s on disk after the first experiment:

The first entry is the old version of the row, the second the new version.

The lp is the line pointer number, which stands for the number of the tuple within the data page. Together with the page number, this constitutes the physical address (tuple ID or tid) of a tuple.

It follows that the t_ctid stored in the tuple header is usually redundant, since it is implicit in the line pointer. However, it becomes relevant after an UPDATE: then t_ctid contains the tuple identifier of the updated version of the row.

This is the “missing link” between the old row version and the updated one!

Looking at DELETE + DELETE with “pageinspect”

Let’s compare this to DELETE + INSERT:

Here the t_ctid column from the old, deleted tuple is unchanged and there is no link to the new tuple. The second tuple is not found by the SELECT ... FOR UPDATE, since it is “invisible” to the “snapshot” used for scanning the table.

There are also some relevant differences in the attributes infomask and infomask2. You can see the meaning of these flags in the PostgreSQL source file src/include/access/htup_details.h.

To understand the difference between UPDATE and DELETE+INSERT, we had a closer look at the tuple headers. We saw infomask, infomask2 and t_ctid, where the latter provides the link between the old and the new version of a row.

PostgreSQL’s row header occupies 23 bytes, which is more storage overhead than in other databases, but is required for PostgreSQL’s special multiversioning and tuple visibility implementation.

UPDATE can be challenging in PostgreSQL: if you want to read more about its problems and how to deal with them, read my article on HOT update.