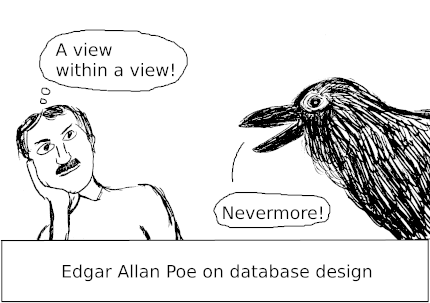 We all know that in PostgreSQL we cannot drop an object if there are view dependencies on it:

In this article I want to explore the mechanics behind view dependencies and show you how to track what views depend on a certain PostgreSQL object.

Why would I need that?

Imagine you want to modify a table, e.g. change a column’s data type from integer to bigint because you realize you will need to store bigger numbers.
However, you cannot do that if there are views that use the column. You first have to drop those views, then change the column and then run all the CREATE VIEW statements to create the views again.

As the example shows, editing tables can be quite a challenge if there is a deep hierarchy of views, because you have to create the views in the correct order. You cannot create a view unless all the objects it requires are present.

Before I show you how to untangle the mess, I’d like to tell you what mistakes to avoid when you are using views in your database design (excuse my switching to teacher mode; I guess holding courses has that effect on you).

Views are good for two things:

Neither of these applications require  you to “stack” views, that is, define views over views.

There are two patterns of using views that tend to be problematic, and they both stem from the mistaken idea that a view works exactly like a table, just because it looks like one:

Never forget that a view is just a “crystallized” SQL statement and gets replaced by its definition when the query is executed.

How are views stored in PostgreSQL?

A view in PostgreSQL is not that different from a table: it is a “relation”, that is “something with columns”.
All such objects are stored in the catalog table pg_class.

As the documentation states, a view is almost the same as a table, with a few exceptions:

This “query rewrite rule” contains the definition of the view and is stored in the ev_action column of the pg_rewrite catalog table.

Note that the view definition is not stored as a string, but in the form of a “query parse tree”. Views are parsed when they are created, which has several consequences:

How are the dependencies stored?

All dependencies (except those on “shared objects”) are stored in the catalog table pg_depend:

It is important to notice that there is no direct dependency of a view on the objects it uses: the dependent object is actually the view’s rewrite rule. That adds another layer of indirection.

In the following, I’ll use this schema to test my queries:

I have thrown in a function, just to show that a view can depend on objects other than tables.

To find out which views directly depend on table t1, you would query like this:

Actually, the views will usually not depend on the table itself, but on the columns of the table (the exception is if a so-called “whole-row reference” is used in the view). That is why the view v2 shows up twice in the above list. You can remove those duplicates using DISTINCT.

We can modify the above query slightly to find those views that depend on a certain table column, which can be useful if you are planning to drop a column (adding a column to the base table is never a problem).

The following query finds the views that depend on the column val of table t1:

Now if you haven’t heeded the advice I gave above and you went ahead and defined a complicated hierarchy of views, it doesn’t stop with direct dependencies.
Rather, you need to recursively go through the whole hierarchy.

For example, let’s assume that you want to DROP and re-create the table t1 from our example and you need the CREATE VIEW statements to re-create the views once you are done (dropping them won’t be a problem if you use DROP TABLE t1 CASCADE).

Then you need to use the above queries in a recursive “common table expression” (CTE). The CTE is for tracking recursive view dependencies and can be reused for all such requirements; the only difference will be in the main query.

We need the GROUP BY because a view may depend on an object in more than one ways: in our example, v2 depends on t1 twice: once directly, and once indirectly via v1.

Have questions? Need PostgreSQL support? You can reach us here.