What to return from a PostgreSQL row level trigger? 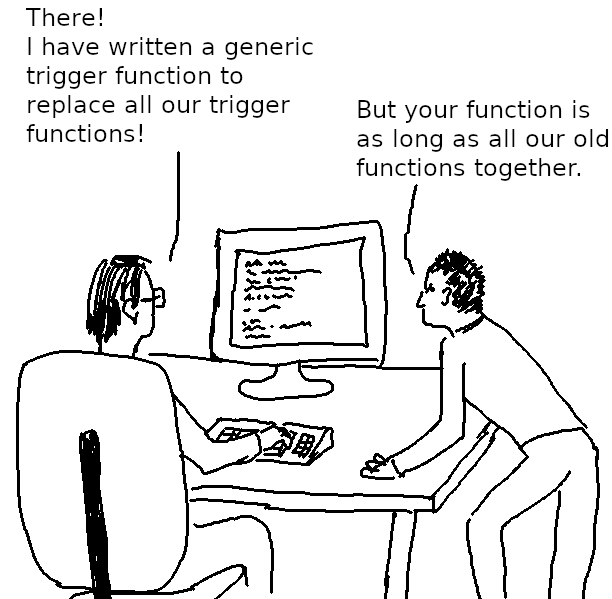 In this article, I’ll talk about row level triggers, which are the most frequently used kind of triggers. I will describe what the return value of the trigger function means and suggest a useful code simplification.

A trigger in PostgreSQL consists of two parts:

PostgreSQL has event triggers and triggers that get activated by data modifications. We will only consider the latter in this article.

Furthermore, triggers can run BEFORE, AFTER or INSTEAD OF the data modification that triggers it. INSTEAD OF triggers must be row level triggers on views.

The return value of a trigger function

Trigger functions are always declared as “RETURNS trigger”, but what you actually have to return is

The return value is ignored for row level AFTER triggers, so you may as well return NULL in that case. That leaves row level BEFORE triggers as the only interesting case.

In row level BEFORE triggers, the return value has the following meaning:

Note also that you can have more than one row level BEFORE trigger on a table. In this case, the triggers are executed in the alphabetical order of their name, and the result of the previous trigger function becomes the input for the next trigger function.

The special variables NEW and OLD in a row level trigger function contain the new and the old row version. They can be modified and used in the RETURN statement.

We want to capture data modifications to a table mytab in mytab_hist:

Here we assume that id will never change; otherwise we would have to come up with something more complicated.

Note how similar the code for both branches of the IF statement is. It would be nice to simplify that. Indeed the coalesce function makes it possible to write the same function in a much simpler fashion:

coalesce will return the first of its arguments that is not NULL. This does exactly the right thing in our case, because NEW is NULL in ON DELETE triggers.

Instead of writing complicated conditional code for the return value of a row level trigger, resort to the simple

which is almost always the right thing.

If you want to know more about triggers, you may want to read my article about constraint triggers.